Last week, the Supreme Court of the United States ruled that bans on gay marriage are unconstitutional, legalizing gay marriage throughout the US. I live in Canada, and have only a handful of friends from the US, but even so my Facebook feed was very polarized over the weekend: most of it was rainbow-coloured, thanks to Facebook’s feature that enabled users to put a rainbow filter over their profile picture in celebration of the ruling, and using the message “love wins”; but there seemed to be almost as many people posting articles and memes featuring various conservative Christian leaders decrying the SCOTUS decision and its popular support, or even writing their own comments reminding their Christian friends that as Christians they “cannot support this.”

This leads me to two thoughts. The first thought is “we don’t need to support this.” This was a Supreme Court decision about constitutionality, not the result of a referendum (as happened recently in Ireland). Many of the comments and memes make it seem like people believe that this signals a shift in public opinion, as if suddenly US citizens became much more gay-friendly overnight. In reality, most of those people with rainbow-coloured profile pics were already gay-friendly. I think many people were surprised to see just how much support for this there actually was, but that doesn’t change the fact that this is not a reflection of that support, this is a ruling on constitutionality. (It has also been noted elsewhere that many people don’t seem to realize that Canada has had legal gay marriages for a decade already.)

In Jesus’ day, marriage was largely a financial transaction in which one man would pay another man for his daughter, so that she could produce children for him. Some dowry systems required that the groom paid the father; other dowry systems required that the father pay the groom for taking his daughter off of his hands. This all had to do with the economics of poor agricultural societies in which families were the primary unit of work and productivity, but in a heavily patriarchal society, it’s still just thinly veiled slavery. A daughter received no education, no birthright or inheritance (unless she had absolutely no brothers), no say in matters of the community (unless she was a prophetess), no share in the priesthood and a lesser space in worship, no control over her own sexuality or fertility or body in any meaningful sense, and no choice over who she married. Legally, an unmarried woman who was raped was supposed to be married to her rapist; this was even an act of mercy, because an unmarried woman who was not a virgin would never find a husband willing to pay to marry her, which would leave her destitute, probably working as a beggar or prostitute (for a look at how desperate this situation was, read Ruth). Polygamy was surprisingly common, too. Women were unable to initiate a divorce from their husbands, but a man could divorce his wife for any reason he wanted; some rabbis in Jesus’ day insisted that burnt dinner was sufficient cause for divorce. While the law said that both the man and woman caught in adultery should be stoned to death, in practice the man could often get away with it while the woman would still be killed (unless Jesus was there to draw a line in the sand and say “he who is without sin, cast the first stone”). And women were often married off to much older men: some scholars believe that Jesus’ mother Mary was probably about 13, while Joseph was probably in his thirties or older.

Even so, a wedding was one of the greatest celebrations in Jewish culture. It would often go on for days, include the whole community and as many family as could attend, and involved drinking a lot of wine in celebration. Love was not the purpose of weddings back then, but it was a blessing bestowed on the couple, that they would love one another and be fruitful and multiply and find rest and peace together. The marriage ideal that we hold now as a pre-requisite for marriage, back then was just a wish and a blessing, the ideal that people hoped marriage would turn into over time. There was an understanding that marriage wasn’t a perfect thing, but that it could become perfect if the people involved in it devoted themselves to each other. Marriage was not the zenith of a perfect society, it was a means of God’s grace in a broken one.

We can see this in the way that marriage is used as a metaphor for God and his people. Much is often made of the Christological interpretation of Song of Songs, which is essentially erotic poetry about enjoying love, but the main place that the Bible uses marriage as a metaphor for God and his people is in Hosea. God tells the prophet Hosea to marry a prostitute who repeatedly runs away from him and continues to ply her trade, and says that this is the way that God was married to Israel. Hosea always takes her back, and pursues her, even as she runs away. All he wants is for her to remain in the security and providence of their family, and finally to love him and their children. Hosea’s persistence in following his prostitute-bride is God’s grace on his people Israel. Marriage is not a perfect union, but rather an image of God’s grace, and a means by which we can experience that grace and understand God’s providence.

In the New Testament, the marriage metaphor continues – except that now the metaphor is that Christ is the bridegroom and the church is the bride; and Christ is the exemplar for husbands, who should give themselves up for their wives (rather than dominate them, as they had every legal right to do). Wives who become Christians are urged to stay with their unbelieving husbands (who continue to have almost total control over them, by the way), so that their good example might win their husbands over, i.e., so that their marriage might redeem their family, and their presence within that marriage might function as a vessel for God’s grace on an unbelieving spouse in an imperfect society. Paul says that being married is a wonderful burden, but if you can be like Christ without getting married, you’re even better off.

When Jesus performed miracles, it was expressly to lend the authority of God to his teachings and actions. Jesus’ first miracle in the Gospel of John was to create extra wine for a wedding he was attending (yes, even after everyone was already drunk). His presence at a wedding could be seen as an endorsement of the practice, but his catering of it by divine miracle can be read no other way. And the wedding that Jesus endorsed was just like any other in his day: an economic transaction, an imperfect institution of a patriarchal culture that gave one person license to dominate another, license for an old man to have sex with a young girl…and a way that God shows grace to his people, an incubator in which people can show grace to one another and become more like Christ, and a way by which, we hope, people can love each other more.

So if we’re concerned that a gay marriage is incorrect, imperfect, even sinful – well, it fits right in with marriage through the ages. It’s a way for gay and lesbian people to foster deeper love and grace for one another within a broken world, in spite of any imperfections and sins they may have and will continue to have. It is not a sacralization of sin – it’s not about sin at all; rather, it is an opportunity for love and family to grow in the midst of and despite a sinful world, and therefore a means of God’s grace to the world.

So if we ask the perennial Evangelical question of What Would Jesus Do in response to the legalization of gay marriage, I’d say he’d probably bring the wine. 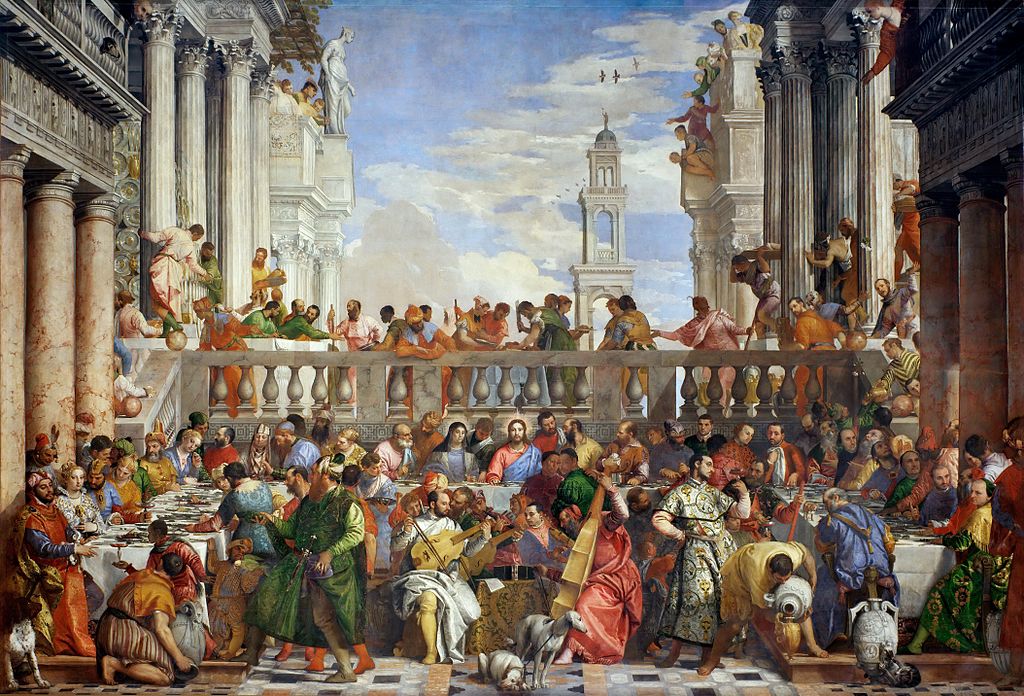 The Wedding at Cana by Paolo Veronese