After a few weeks of overwhelming work schedule, I’m finally back on the thesis train. Hallelujah!

The point of my thesis is that, though Wink and Boyd have quite different notions of what types of entities are involved in spiritual conflict, their ethics are the same. The first half of the thesis shows how different their theologies are, and the second half shows how similar their responses to those theologies are – that is, how they believe we ought to respond to those realities. I was relieved, while reading Satan and the Problem of Evil by Greg Boyd tonight, to see just how right I was about this overlap in regard to prayer: he quotes Wink about a dozen times in this chapter.

Prayer is something that I’ve always struggled with. Jesus tells us that God knows what we need before we even ask for it, but then later tells us to be persistent to the point of being annoying in asking God for things. It has always suggested to me that God knows what we want, is able to grant it, but withholds it until we beg for it. Naturally, I don’t like this image of God. I’ve taken solace for the last several years in the notion that prayer is more about us aligning our wills to God’s will; rather than prayer being about us changing God, it’s a way for God to change us. I still believe that this happens to a large extent: pick something important that you don’t particularly care about, like a person or company or nation you find to be annoying or  belligerent, and pray for them every day for a month, and then see how you feel about them. Prayer is a conversation with God, and though we don’t hear God’s responses audibly, they do influence us; I believe that they do so by making us care about what God cares about, and making us see others in the way that God sees them.

But this doesn’t account for the way scripture portrays prayer, particularly the passages in which people successfully change God’s mind. Abraham and Moses stopped God from killing large numbers of people, begging for leniency and grace when the people didn’t deserve it. There are times God says that he looked all over for someone to intercede on the behalf of those people whom God was about to judge, and couldn’t find anyone (Ezekiel 22:29-31). The former passages sh0w that God can be influenced by human beings; the latter shows that God wants to be influenced by human beings. Indeed, it’s hard to make sense out of prayer, and especially about the way scripture portrays prayer, if it doesn’t actually influence God or earthly events. As Wink puts it,

If we are to take the biblical understanding seriously at all, intercession…changes the world, and it changes what is possible to God. – Engaging the Powers, 302.

Reflecting similarly on Daniel 10, Wink had previously noted that

The point here seems to be that Daniel’s intercessions have made possible the intervention of God. Prayer changes us, but it also changes what is possible for God. Daniel’s cry was heard on the first day; it opened an aperture for God to act in concert with human freedom. It inaugurated war in heaven. – Unmasking the Powers, 91.

We can come to the same conclusion from the other side: why do some prayers go unanswered?

Prayer involves not just God and people, but God and people and the Powers. What God is able to do in the world is hindered, to a considerable extent, by the rebelliousness, resistance, and self-interest of the Powers exercising their freedom under God. – Engaging the Powers, 311.

I’ve said that Wink and Boyd have common ground on this issue. In fact, all of the quotes above were taken from Satan and the Problem of Evil by Gregory Boyd, who relies on Wink more than any other source in chapter seven of this book. But Boyd isn’t just repeating Wink, though he quotes him extensively; he goes beyond Wink’s thought in this regard, filling in the blanks.

Wink is adamant that prayer changes God, and even that God (at times) needs prayer in order to be able to act. He implies that, because of the God-given freedom of human and spiritual beings, God’s ability to act in a situation is enhanced by partnership with other actors; in a sense, when we pray we are giving God permission to get more directly involved. The argument could be made that when God gets directly, miraculously involved in a situation, it impinges on the freedoms of the other agents involved; prayer is an acknowledgement of this, a way for us to freely give up our God-given freedom so that God can exercise greater influence over events. There are problems with this, and Wink never really discusses them; he’s much more focused on the fact that our prayers DO change God’s mind, have an actual impact on events in the real world, and therefore we have a responsibility (and privilege) to pray. “Prayer that acknowledges the Powers,” he claims, “becomes a form of social action” (Engaging the Powers, 317 – again, cited by Boyd).

Gregory Boyd discusses prayer much more thoroughly, picking up Wink’s thoughts and exploring them philosophically. God has made us morally responsible agents, which requires that we have free will (the ability, or “say-so” as he puts it, to influence others for good or evil). The point of this free will is love: God created us to participate in his triune love, and for us to do so, we have to not only be able to choose to love (and obey) God (or not), but also have the ability to influence God even as God has the ability to influence us. These are all essential parts of a real relationship, and even if they are not equal (i.e. we don’t have as much influence over God as he does over us), without them we wouldn’t have a real personal relationship with God.

So the upside of this is that we have real relationship with God, and that we are in a very real and important sense free. The downside of this is that we are free to disobey, free to harm others, etc. We have equal potential toward either good or evil, but in either case, every relationship we have involves the ability to influence the other in that relationship – including God. For God to have real relationships with human and spiritual beings, then, God must be self-limiting, restraining himself from controlling people and events entirely, and allowing himself to be influenced and changed by us. This is the only way that we can be free, i.e. moral agents, and this gives us a spiritual influence not only over God, but over the world and events:

Prayer is part of our moral say-so in influencing the flow of history and thus is a crucial variable that God considers in determining his response to certain situations. – Boyd, Satan and the Problem of Evil, 230.

Boyd highlights something that I had never thought about before: we’re very aware of our physical influence over events, why should we doubt our spiritual influence?

An important point, to me, is that Boyd relates prayer to our divine vocation as God’s representatives on earth, and its eschatological fulfillment:

Prayer is an essential aspect of our coreigning [sic] with God. God wants his will carried out on earth, but he wants it carried out in cooperation with us….In prayer we begin our eternal job of mediating the Father’s will and reigning with Christ on the earth. – Ibid., 233-234.

Again, we gain insight from looking at this from a negative angle: why are some prayers unanswered? Jesus says that we ought to have passion, persistence, and strength in numbers. As I mentioned above, this notion has always sort of bothered me – but as Boyd points out,

Why should we think otherwise, since persistence, passion, and large-group cooperation significantly affect what morally responsible creatures can and cannot accomplish on a physical level? – Ibid., 235.

If I affirm that I am necessarily both a physical and a spiritual being, why do I assume that my spiritual influence does not correspond at least to some extent to my physical influence on the world around me?

Another thing that I love about both Wink and Boyd’s approach to prayer in a “spiritual warfare” context is that they don’t attempt to apply prayer to spiritual warfare; they treat them as inseparable.

The importance of the above noted variables of persistence and numbers in prayer only begins to make sense when we begin to understand that prayer is fundamentally a warfare activity. To pray that the Father’s will would be done on earth as it is in heaven (Mt. 6:10) is to pray against all wills that want their own will done against the Father’s will – and these opposing wills are significant. – Ibid., 235.

Both of them thus affirm not only our privilege to pray and participate with God’s will, but also our responsibility to pray as a way to enact our co-regency over the earth in anticipation of the eschaton, and in so doing as an act of spiritual warfare against those beings and forces that would oppose God’s kingdom. Prayer does not just change me, it changes the world; it projects the moral influence that God has given me as a free moral agent into the spiritual realm, just as my choices affect the physical world around me. Prayer is a form of exercise for my will in the spiritual realm: similar to the way that Christ becomes incarnate when I act ethically in the world, I become incarnate (reverse-incarnate?) in the spiritual world when I appeal to him in petitionary prayer.

I’m going to pray more from now on, and I don’t think it’ll be a chore. 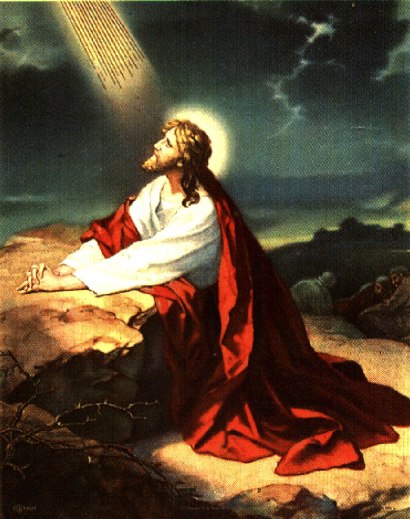